Is your legacy email archive limiting your business in a technology-first world?

Whether you used MX Logic before it was acquired by McAfee or used tools from the short-lived Intel Security platform, you are likely looking to move away from a now obsolete solution or have begun preparations already. However, with significant changes to your infrastructure comes new opportunities. The power and flexibility of modern, cloud-based email solutions like Microsoft Office 365 and Gmail are regularly luring businesses away from their legacy archiving solutions such as Enterprise Vault and EMC SourceOne, or those like MX Logic and Mimosa Nearpoint that have reached end of life and are no longer supported. Regardless, in an ever more competitive business world, your best move is a move to the cloud.

Click on any chapter to jump directly to it.

Break free of limitations and take control of your data

Option 2: Your own public cloud

The fastest, most accurate archive migration

Common questions when moving away from McAfee MX Logic

Break free of limitations and take control of your data

Whether you’re looking for more predictable costs, reduced maintenance and security burdens, or the flexibility and cutting-edge tools the cloud offers, migrating to a cloud-based platform has become an essential choice for businesses in the last few years. With many organizations competing with those that were ‘born in the cloud’, it’s a natural step in order to maintain or regain competitive advantage while also enhancing security and compliance for your business as markets, regulations and customer demands change. However, in order to make these opportunities a reality, you need to organize a migration of your existing archives. It needs to be a seamless, accurate process with no hidden surprises, and it must maintain legal chain of custody over your data as well as limiting the impact on your business operations. So, where do you turn? 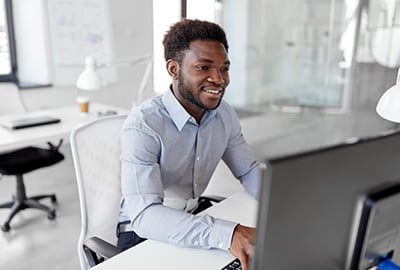 Moving to the cloud: what are your options?

There are two main ways to move your legacy archive to the cloud, but only one that provides the benefits of cloud computing in its truest sense. The first option is to use Software as a Service (SaaS) archiving, like solutions provided by Mimecast and Global Relay. While solutions of this kind might seem like the simple way to go, they do come at the cost of security, access, accountability, and control over your data. The second option is to migrate your data to a true hyperscale cloud that offers complete flexibility and enhanced security.

Moving to a SaaS archive might feel like you’ve shifted to the cloud, especially if you’re moving away from an on-premises environment, but the reality is very different. You’ll likely hear SaaS vendors claim they offer the best turn-key cloud archiving platforms, but SaaS archives restrict you from accessing the best features of the cloud due to their one-size-fits-all approach. Most don’t own their own datacenters, and so rent a cloud space in which they archive the data of multiple organizations. Why is this a problem? This is what’s known as a multi-tenant cloud, and it provides a significant drawback for the client – your encryption keys are controlled by the SaaS vendor and could be used across their SaaS clients. Because encryption keys could be re-used among many clients, data breaches and the associated regulatory issues are much greater. It also means that the SaaS vendor can access your company’s sensitive data at any time. 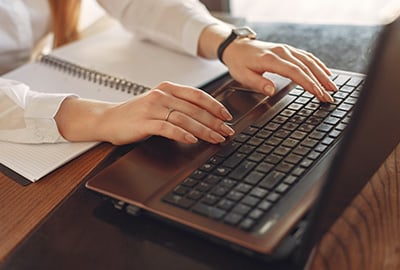 If you’re sharing a cloud with others, you don’t have control over a wide range of factors. The digital equivalent of shared office space, a SaaS-based archive means the vendor controls everything from security protocols and policies to the global location data is stored in and, crucially, the encryption keys that unlock your data. Proprietary wrappers also mean you can’t access your data effectively or use the latest tools to extract insight from your archive. This black box approach is a far cry from the features of the true public cloud and moves you into only a marginally better place than a legacy, on-premises archive.

In a recent survey of global IT executives, including VPs, directors, and members of the C-suite at major corporations, only 19% of those surveyed believed 75% or more of their SaaS vendors met all of their security requirements. 70% stated they had been forced to make at least one security exception for a SaaS vendor. While many of these organizations are likely using popular SaaS products like Microsoft Office 365 and SalesForce, where the size and standing of the vendor might make the business more amenable to accepting a perceived lower risk, the clear takeaway is that SaaS solutions don’t provide the security standards modern organizations require. 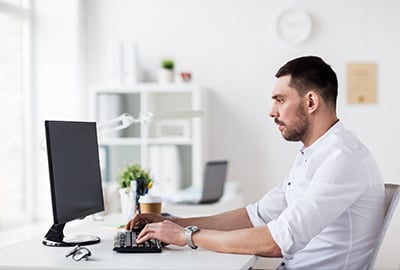 Elsewhere, on the topic of encryption keys, an astounding 95% of respondents believed it was important to control their own encryption keys, and 81% were uncomfortable with their SaaS vendors controlling them. However, 74% of those surveyed said they did not control the encryption keys for the majority of their SaaS solutions. This is a worrying statistic and one that many organizations will have to take steps to reverse as regulations continue to tighten and the threat of cybercrime grows. To that end, 92% of executives said they would need more security customization in the future, with 63% of them planning to retire SaaS applications that didn’t provide them control over encryption keys.

These statistics paint a clear picture of the business security landscape and the risk that the one-size-fits-all approach of SaaS vendors introduces. As the trend for security customization continues and scrutiny over data access and handling increases, SaaS solutions will become increasingly less palatable for businesses aiming to de-risk their operations. Instead, more secure and customizable solutions, such as those in the public cloud, will be sought.

Option 2: Your own public cloud

The only way to ensure you retain complete control over your sensitive, archived data and can apply your own security standards and protocols, is to migrate to an archive hosted in your own secure hyperscale cloud. A public cloud environment, like those provided by Microsoft and Amazon, can provide you with full flexibility, unlimited access to your data, data storage in its native format, and the most advanced security features and controls. Using your own cloud not only enhances the security of your data but means you are able to do more with it, harnessing it to unlock insight using cutting-edge AI (Artificial Intelligence) and ML (Machine Learning) tools. None of this is possible natively with a SaaS archive and highlights the true, uncompromised benefits that a public cloud archive can offer.

The fastest, most accurate archive migration

Weighing up providers when it comes to your migration is an important step to determine what you do with the terabytes of data stored in your existing archive. While a number of migration vendors exist, including QuadroTech and Transvault, we believe that the key is a high performance email migration tool that can not only move your data to the cloud at the highest possible speed but ensure the migration is complete, accurate and that chain of custody is maintained. Your next steps should also include deciding on how you will decommission your legacy infrastructure, how email that has been stubbed or shortcut will be accessed, whether archiving or journaling is the right decision for you, and if you will move your existing data to a cloud-based solution like Office 365. Archive360 can handle each of these elements for you as part of a complete package, including archive migration, records classification, stub rehydration, and beyond to archiving and journaling, all in your own open archive that you control.

Our combination of experience and cloud-based automation is going to make you look really good.

We interviewed 1,100 customers to learn what they loved and hated about their legacy archive and used that insight to create a completely new kind of archive platform.

Common questions when moving away from McAfee MX Logic

With more than a thousand successful archive migrations completed, Archive360 knows a thing or two about the migration process. Our years of experience enable us to dispel your fears and answer any questions you might have as you begin your journey to the cloud. Such questions might include...

Find out more about Archive360’s unique approach to pain-free migration.

Archive360 provides the cloud archive trusted by enterprises and government agencies worldwide, purpose-built to run in the hyperscale cloud. Installed and run from your organization’s individual public cloud, you retain all the power, flexibility, and management while maintaining complete control of your data and its security, including encryption keys that only you have access to. Additionally, unlike on-premises and SaaS archiving solutions, you are free to unlock valuable insights via data analytics and carry out powerful searches on your data using the latest cloud-based tools that will benefit multiple teams across your business, from HR to legal and compliance.  Find out why major, regulated organizations around the world trust Archive360’s cloud-based information management and archiving solution with their most valuable data. Get in touch to request a demo today.

Archive360 has successfully helped more than 2000 customers extract data from 20+ enterprise archives, legacy applications, and file system repositories, including the following: (click on the link for more information) 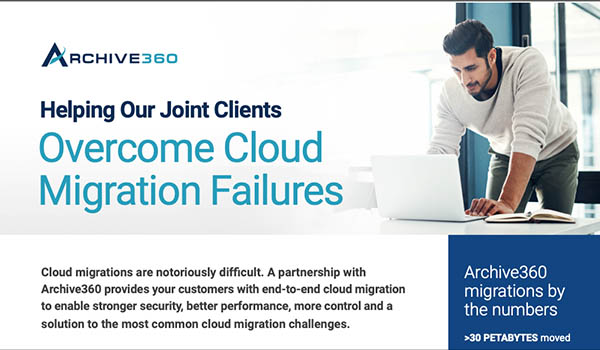 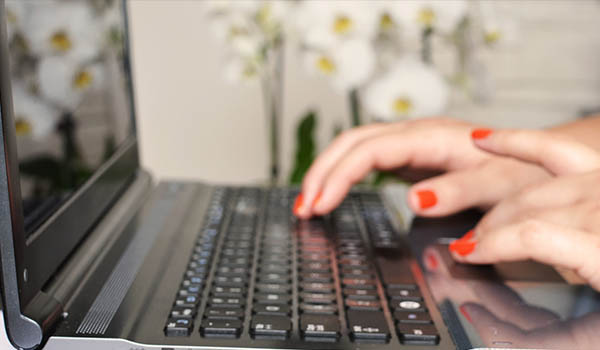 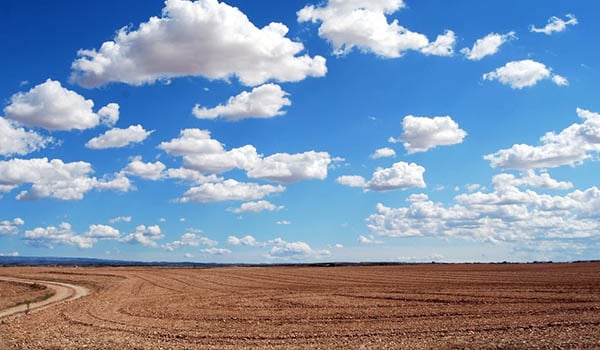 Why you should turn on Office 365 archiving for your business (and how to make the most of it if you already have).

Migrate your data from your McAfee MX Logic archive today!

Find out why major, regulated organizations around the world trust Archive360’s cloud-based information management and archiving solution with their most valuable data. Get in touch with an expert today.